The Shape of Treasure

It is not enough on its own to consider what the meaning of a treasure should be to the player-character; we must also consider the treasure’s form, as this form will have consequences on the mechanics of the game in play.

A cube is a very easy shape to build and to work around, but I’m not convinced that the cube on its own provides a particularly rich set of interaction opportunities. The cube has some benefits: being equal in size on all sides means that it has no specific natural orientation. This means that the game doesn’t have to track the absolute orientation of the treasure; it is enough to know whether or not the cube has one face that is aligned with the ground or not.

A cube, when placed, will always stay exactly where you left it. This is both an opportunity and a hazard. It makes it easier for the player to keep track of the treasure, especially if it should go off-screen. For cases where we want the treasure to be used to hold a switch down or to act as a weight on a platform in some fashion, it’s preferable if the treasure were to not move.

This is somewhat lacking in dynamic character, though. The cube cannot roll, and so it cannot get away from the player, but it can also not be used as a tool by the player in many different ways. The player must carry the cube everywhere, as the cube will not move without playing interaction in so many cases.

There is also the problem that making the treasure a cube is very reminiscent of Portal and its Companion Cube. As much as I enjoy the Portal games, I don’t want to quote them so directly.

A cube can also function as a box; objects may be placed within it, or it may hold something else entirely. There’s some opportunity here, but I’m not quite sure how to wield it.

A sphere (or ball) is another immediately obvious choice. There are some great properties of a ball: it has no definite orientation, so is easy to program for and easy to work with. The player’s interactions with the sphere need not be a function of the sphere’s orientation. The ability for a sphere to roll along the ground or down an incline is another obvious improvement over the cube in many cases, but in the event that the player wishes for the treasure to stay still, this may be a challenge. A sphere may be placed on a switch if the switch is concave (like some arcade buttons), but it might also easily roll away from the player. The benefit there may be that it would allow me in level design to designate some areas of a level as being places where the treasure cannot be put down, but that goal can be reached through many designs.

A large, indestructible ball makes me feel as if the player is inside of a pinball or Rube Goldberg machine. I very much enjoy that feeling. A sphere affords a rich set of interactions.

Narratively, a sphere is a bit difficult. What treasures historically are perfect spheres? What does the sphere represent and mean to the player? For me, a sphere is too much like a game object; an object that would be a game to the player character, instead of having some other significance within the symbolism of the game world.

The egg has the opposite problem that the sphere has: eggs are rich in symbolic history. Fabergé eggs are historic treasure object, eggs themselves are objects to be protected, etc. There are many opportunities to communicate the value of the egg to the player.

An egg, however, has odd properties in terms of being rolled along a surface, in that an egg will not roll along a straight line. If I’m using a physics library such as Unity or Unreal’s physics, I can’t simply create a shape and set it in motion and allow the physics library to do the heavy lifting for me: I would have to correct the motion of the object if I wanted it to be easily playable.

Another problem with the egg is that eggs typically convey some notion of fragility, but I’m not convinced that a fragile object is necessarily fun. I’d like to keep my options open in terms of whether the treasure is fragile or durable; I imagine it will take some testing to figure out which is the more workable option.

The hoop is a shape I’ve long considered, and may be where I ultimately land. There are a few interesting properties of a hoop.

For one thing, a hoop is a historic play object; hoop rolling is a play activity that has emerged in isolated cultures all over the world. Nearly every culture in the world has some historic form of hoop rolling as an act of play. The hoop can be carried above the player’s head or rolled along the ground.

A hoop can also be visually interpreted to be akin to a ring, a classic treasure object.

One problem I imagine with a hoop is that a hoop cannot be placed on top of a switch in order to keep the switch depressed, what with the hoop being hollow in the middle.

Some of the best properties of the hoop can be realized by instead thinking of it as more of a large disc or very short cylinder. By filling in the hoop’s center, we afford the player the ability to place the treasure on top of a switch to keep it pressed down; a very durable disc could also act a sort of shield to protect the player from harm, or perhaps a place for the player to stand.

A disc has two distinct orientations: laying flat and on its side. These different orientations can allow for different interactions. Stood on its side, the disc could be rolled along the ground; laid flat, it could be stood upon. The range of potential mechanics provided by a disc is very rich.

Imagining the player holding the disc above their head: 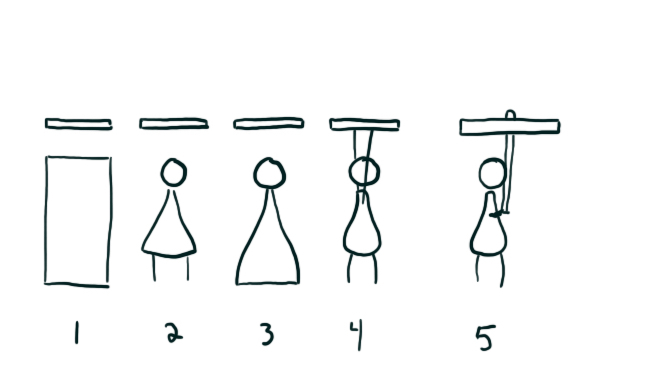 A player without arms, in the style of Rayman, would appear almost as if they have a halo (examples 2 and 3). Perhaps the player has arms and they raise it above their head as in example 4.

Beyond the mechanics, a disc can have multiple narrative interpretations. It is at once a large coin, but it is also reminiscent of a manhole cover. 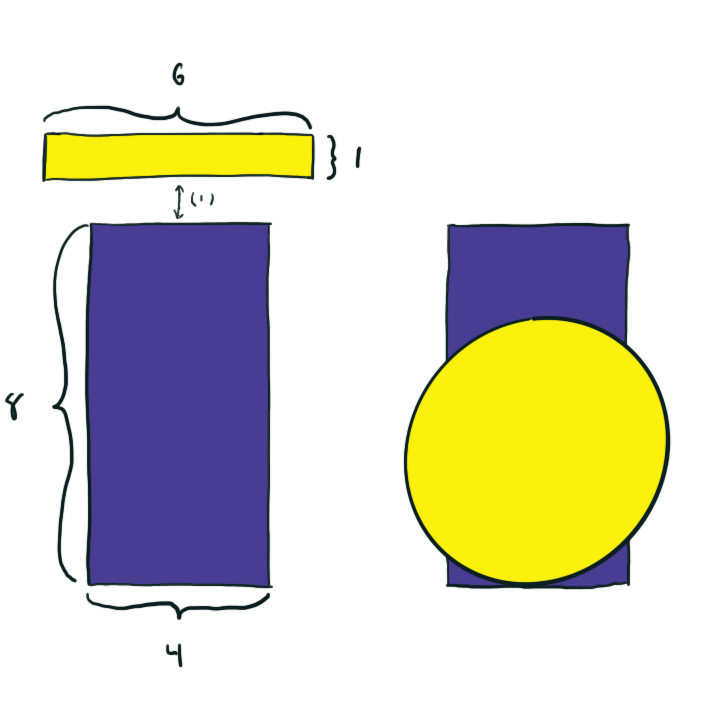